Kubernetes is becoming the standard container orchestrator because of many reasons:

Today we can work in very complex projects which involved too many languages and technologies. Containers (like Docker) and orchestration tools help a lot in these cases.

Elixir and Erlang are two languages that I work with, especially when I have to deal with problems of concurrency and low latency. Working with these two languages directly give you the possibility of building distributed systems in a really easy way. Erlang/Elixir purists normally try to avoid containers and therefore orchestration tools. It is true that the Erlang ecosystem provides all the necessary tools in order to build a fault-tolerant distributed system so, why are you going to use containers? But we are facing a different problem where we are going to use the best tool for each job. When different tools/languages are used in the same project and all of them are going to create a heterogeneous distributed system, containers and orchestration tools are the best approach that I know.

Create an Elixir/Erlang docker image and run the container could be easy. Running it inside Kubernetes is easy as well. Building a distributed erlang system in Kubernetes could be more complex but connecting a local node to kubernetes erlang/elixir node that is part of an Erlang cluster is really challenging.

When an Erlang/Elixir node is going to be started, we have to provide a cookie and a long name. The cookie has to be the same in all nodes that belongs to the same cluster. The long name will contain a unique name inside the same server, usually the name of the application, and the IP of the server separate by an @, for instance, app@192.168.1.10.

Once we have our node up and running, we can connect our node to another known one:

Distributed Erlang uses TCP by default as and you know we need a port to open a TCP socket. The node will request the port to the epmd server which will be running in the machine whose IP is part of the long name of the node that we want to connect with. The epmd server runs on port 4369 by default.

Networking in Kubernetes is not easy, especially when we have to make special things. The most important part in order to get our Erlang distributed cluster is to have a reliable way of getting the IP of the pods in order to be reacheble by other Erlang/Elixir nodes. StatefulSet will be the Kubernetes object that will be used. It provides a known name of the pod () which will be included as DNS entry. Different environment variables will be included in the yaml definition:

The pod will expose two ports: The epmd port and the erlang port. The service will indicate that we don’t need cluster ip: clusterIP: None.

Now we have our Erlang/Elixir application up and running inside our Kubernetes cluster. If we resolve the IP for the name app-0.app.default.svc.cluster.local and we connect to app@IP we will have our erlang cluster of two nodes.

Connecting from Outside Kubernetes

Kubectl can forward traffic from some ports of a chosen pod, so we can forward the epmd port and the erlang port of our application: 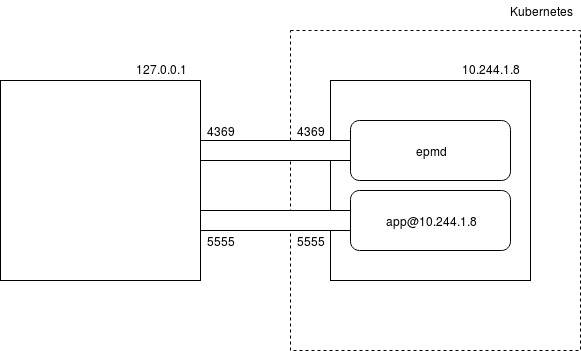 If we try to start a BEAM node, it will be registered in the epmd of the Kubernetes cluster. But how will connect our local node to the kubernetes node? We know the name “app” but, which IP should be used?

We need to use the pod ip but it has to work as local. The solution would be to redirect all the output traffic whose destination is the pod’s ip to localhost.

Iptables to the rescue

After finishing the connections we should remove the rules

I hope that this post is useful for more people. Comments are welcoming !!